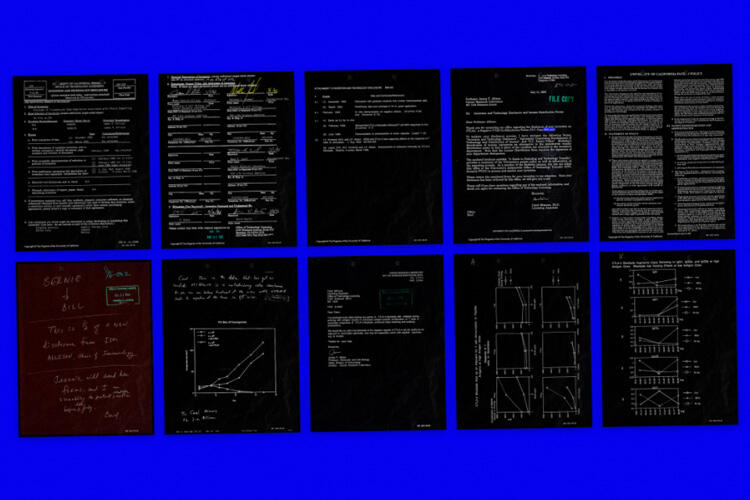 At the highest level, the role of science in society today is part of what is on auction here today. We wanted people to tap into the wonder of remarkable science, even if they didn’t bid on the NFT. An important benefit of this process is that we’ve now built an A+ team that will serve as capacity for future innovation at Berkeley, not just for the minting of other Nobel NFTs.
Rich Lyons, Chief Innovation & Entrepreneurship Officer, UC Berkeley

As America’s #1 public research university, as well as the #2 university for venture-backed entrepreneurs, UC Berkeley has always been at the cutting edge of research and innovation. In late spring 2021, UC Berkeley became the first university to mint and auction a non-fungible token (NFT) based on Nobel prize-winning research. This NFT, dubbed “The Fourth Pillar,” honors the breakthrough research that Prof. Jim Allison conducted at UC Berkeley in the 1990’s that established cancer immunotherapy as the new fourth pillar of treating cancer. His invention, the subject of the award-winning documentary, Breakthrough, has saved countless lives for those suffering from fifteen forms of previously untreatable forms of cancer. Dr. Allison won the 2018 Nobel Prize for Physiology or Medicine for his research.

The Fourth Pillar NFT was purchased by a decentralized autonomous organization, or DAO, named FiatLuxDAO. This group of 31 UC Berkeley alumni, many of whom are active in the university’s robust and vibrant Blockchain@Berkeley

‘Why would I want a digital version of some internal university form?’ Because it represents something magnificent. There are people who recognize and care about symbols of great science, and even if they never intend to resell the NFT, they want to collect them and they want resources to go back to Berkeley, where the basic research behind these Nobel Prizes came from, to support further research. People give us donations all the time because they care about the institution and the science. So here is a way for somebody to invest in the institution in a slightly different way.
Rich Lyons, Chief Innovation & Entrepreneurship Officer, UC Berkeley

What is a Non-Fungible Token (NFT)?

They are digital objects/assets such as artwork, video footage, or even Twitter posts. “Non-fungible” refers to an NFT being one-of-a-kind -- the original is uniquely identified on a blockchain. To understand “token” think “pink slip” for a car -- it identifies the owner and allows ownership to be transferred on a blockchain.

How does this benefit UC Berkeley?

UC Berkeley received 85% of the auction price and will receive 10% of the proceeds of any subsequent sale of the NFT in perpetuity. The minting and auction of the first NFT by a major research university made international headlines and was the subject of over 40 articles, radio, and television spots. For a listing of some of the press coverage, please click here.

The winning bid came from a consortium of our own UC Berkeley alumni, who over the last few days organized themselves in a DAO -- or decentralized autonomous organization -- called FiatLuxDAO

What is a Decentralized Autonomous Organization (DAO)?

The first Decentralized Autonomous Organization, or DAO, was created in 2016 to enable an automated and decentralized form of crowdsourced investments to act like venture capital funds. Using ether, members of the DAO are able to contribute funds anonymously from anywhere in the world.

UC Berkeley is working on the minting of our next #NobelNFT based upon the Nobel Prize-winning CRISPR research of Dr. Jennifer Doudna of the Innovative Genomics Institute. UC Berkeley is currently home to ten Nobel Laureates and many more across its rich history.

Additionally, please note that a portion of the university’s proceeds will go toward carbon offsets of the energy costs of minting the NFT.

Who were key players in the minting of this first #NobelNFT?

The idea of the #NobelNFT came from Mike Cohen, Director, Innovation Ecosystem Development & Associate Director, Office of Technology Licensing. Chief Innovation and Entrepreneurship Officer Rich Lyons was also an instrumental part of the project team. UC Berkeley is also grateful to alumnae and project contributors Justine Humenansky and Medha Khotari for their overall expertise and Maggie Valentine for her design expertise.

In October 2016, the Berkeley Bitcoin Association, a group of about a dozen members, founded Blockchain at Berkeley, an organization dedicated to becoming the blockchain hub of the East Bay. They also debuted the world’s first undergraduate university-accredited blockchain course, Blockchain Fundamentals, taught to about 50 students. Alongside Blockchain at Berkeley’s education team grew a consultancy that aimed to bridge the gap between geeky bitcoin enthusiasts and technovative early-adopters in the industry to develop Proof-of-Concepts for disruptive blockchain use cases. Since then, as a result of other ambitious B@B members, R&D and Design departments have also emerged. Learn more at Blockchain at Berkeley.

What is the Berkeley Blockchain Accelerator?

The Berkeley Blockchain Xcelerator is a joint venture between Berkeley Engineering’s Sutardja Center for Entrepreneurship and Technology, Blockchain at Berkeley, and the Haas School of Business. Entrepreneurs can pursue ventures in the blockchain space, tap into the vast resources of UC Berkeley and Silicon Valley, and receive expert industry guidance to create high-value blockchain startups.